‘Told He Belonged but Keep My Mouth Shut’ BULLETIN

A former guard at local Communist Party headquarters, Richard St. Clair, testified today that Harry Bridges conferred there several times with local party leaders and longshore officials. Mr. St. Clair said other Communists told him: “Yes, Bridges is one of us, but keep your mouth shut about it.”

Robert Wilmot, a former Portland, Ore., Communist, expressed the opinion in the Bridges deportation hearing today that “Harry Bridges is the greatest enemy the labor movement ever had.”

Mr. Wilmot, a Government witness, said he considered Mr. Bridges “too dictatorial,” and charged that “attempts are made to frame people with disagree with him.”

He reiterated testimony he gave late yesterday that he had seen Mr. Bridges at “top fraction” Communist meetings in Portland, and that Mr. Bridges took a pro-Communist attitude in connection with a labor paper of which Mr. Wilmot was editor.

Defense attorneys, during cross-examination, brought out that while Mr. Wilmot was editing the Labor New Dealer, a Portland publication, he was also employed on a WPA writers’ project. Mr. Wilmot declared, however, that “as I was a non-certified WPA worker it was all right for me to do outside work.”

Telling of what he described as a “top fraction” Communist meeting in Portland in April, 1938, Mr. Wilmot said he went to a hotel room and met Mr. Bridges, but left almost immediately after stating that “Jo-Jo will tell the boys, what to do.”

Jo-Jo was identified as Joe Ring, “a Communist and Bridges’ bodyguard.”

During the meeting, said Mr. Wilmot, Mr. Bridges’ desire for the removal of John Brost, an assistant regional CIO director in Oregon, was discussed.

“The committee decided I should take Brost’s job,” said Mr. Wilmot. “I protested, but Jo-Jo told me I’d do as I was told.”

At another meeting, attended by Mr. Bridges, Mr. Wilmot was on the carpet for the manner in which he was editing The Labor New Dealer, he said. He quoted Harry Pilcher, a Communist, as saying to Mr. Bridges:

Mr. Bridges commented, according to the witness:

“We Communists have to stick together.”

Mr. Wilmot testified he had been fighting the Communist Party and had refused to run party statements in the paper.

“Bridges said I should run those statement,” he testified. “Bridges said that if I behaved myself I might come down to San Francisco and ‘get a job on a good paper’.”

“What is your personal opinion of Harry Bridges?”

“I believe him to be the greatest enemy the labor movement has,” replied Mr. Wilmot.

He said that when he first came from the East he considered Mr. Bridges a great labor leader, but later changed his mind.

“I consider him too dictatorial, and I resent attempts to frame people who don’t agree with him. I just don’t like him.”

Defense attorneys asked Mr. Wilmot if he had not been ousted from the WPA project for excessive drinking and if Mr. Bridges hadn’t told him he’d have to stop drinking if he wanted to continue as editor of The Labor New Dealer. 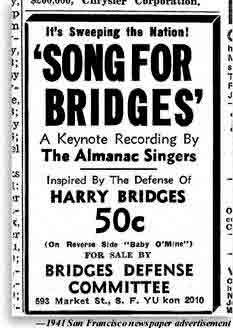 “The Communists had me kicked off the WPA project,” insisted Mr. Wilmot, and he denied Mr. Bridges had rebuked him for drinking. He admitted personal animosity against Mr. Bridges, but said it had not colored his testimony or caused him to deviate from the truth.

Mr. Wilmot said he had submitted his resignation from the Communist Party to James Murphy, a Communist organizer in Portland, in November, 1938, but that “Murphy tore up the resignation.”

Then the witness produced a letter from Communist authorities, written in July, 1939, informing him he had been expelled for nonpayment of dues.

Mr. Wilmot took the stand yesterday afternoon as the 14th witness for the Government after the defense finished cross-examining Nat Honig, Seattle newspaperman.

Harry Bridges received “mandatory orders as a member of the Communist Party” to work for the movement of longshore and other waterfront unions out of the AFL and into the CIO in 1937, declared Mr. Honig.

The orders, said Mr. Honig, came from the central committee of the Communist Party of America and were given to “top fraction” Communist committees here. Mr. Honig previously had testified that Mr. Bridges attended at least 10 local meetings of such committees.

Principal topic of discussion, however, was the work of the Communist Party in lining up waterfront workers, said the witness.

Mr. Honig also told, while being cross-examined, of the Communist Party’s policy of paying its publicity men low wages, and putting them on relief “to save the party money.”

While he was on The Western Worker here, said Mr. Honig, he was paid from $5 to $15 a week, and was on relief “two or three months.”

He said other Communists advised him to apply for relief, assuring him “there are plenty of people in the relief setup who will understand when you tell them you are a volunteer worker on The Western Worker.”

Richard Gladstein, of defense counsel, asked Mr. Honig how he felt, while a Communist, about overthrow of the Government by force and violence. Mr. Honig said he’d understood force and violence wouldn’t be necessary in this country because he believed the Communists would gradually gain control of the majority of the people.

And when the issue of control of the Government came to a head, said Mr. Honig, he hadn’t believed violence would be necessary “unless Government authorities themselves used violence and the masses had to use counter-violence.”

Defense counsel questioned Mr. Honig at length as to the circumstances of his having been called into the case as a Government witness. Mr. Honig said he talked twice with FBI agents in November, but gave no statements or affidavits regarding Mr. Bridges.

About 10 days ago, he said, “they checked with me again, and I said I’d co-operate with them and sign a statement.”

“Was that after you had some trouble in a department store in Seattle?” asked Aubrey Grossman of defense counsel.

“Yes,” replied Mr. Honig. (Earlier in the hearing Mr. Honig told of having been involved in some difficulty concerning books in a Seattle store. Details of the incident were not revealed.)

Asked to define his attitude toward Mr. Bridges, the witness said:

“I’ve come to feel that he has been following a policy parallel to that of the Communist Party for the last two years, particularly in that it breaks away from any labor unity between the AFL and the CIO.”

Mr. Honig said he didn’t believe a split in labor “is desirable any more.”