Little more than three months ago the sudden advent of war thrust upon San Francisco the stern necessity of building a defense within her boundaries to cope with disaster that might come. The stumbling and fumbling of the first few weeks is beginning to come to an end and now the picture of a city at war becomes clearer. This is the eighth of a series of articles concerning the defenses we have built, the men and women who led in their building—and the ordinary citizens of which they are built.— The Editor.

When The Emporium finished its plan for the protection of its store buildings, J. Avery Smith, superintendent, figured it was a job well done but he had no idea that his work was just beginning.

That was before Adrien J. Falk, deputy air raid warden of Division One, saw the comprehensive outline for action. Then he asked Mr. Smith to prepare a similar plot and plan for the entire Emporium block—which is bounded by Market, Fourth, Mission and Fifth-sts. Mr. Smith gulped and said why, yes, of course, he’d be glad to go ahead.

So he called in O.W. Litsinger, chief of the architectural and designing department, who had drawn up the store’s plan, and said, “Mr. Falk wants a block plan.”

Six weeks later the plan was completed at a labor cost of $3000 and now it’s in [Police] Chief Dullea’s hands as a model plan for the downtown area. Now that the pioneering has been done, Milton Fletcher, the store’s chief defense warden, figures that it would take “about a month” to make a similar plan for another block. 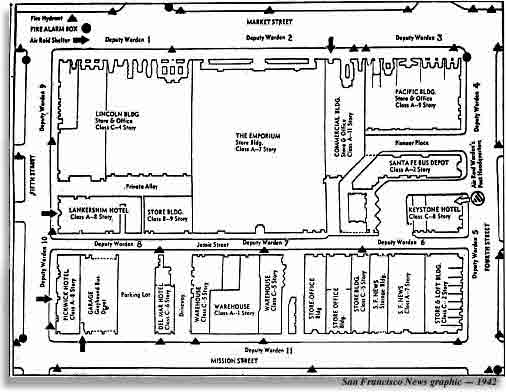 After seeing The Emporium plan, Mr. Falk wanted a block plan which would show what fire fighting equipment was on hand and where it was, the location of air raid shelters, wardens’ posts, fire watchers’ posts, fire alarm boxes, fire plugs, day and night entrances to buildings—he wanted the whole story.

For the block plan, Mr. Smith and Mr. Fletcher started from an aerial photograph which was “blown up” large enough for easy use. Working from this, Mr. Fletcher and his staff plotted the ground plan of the block and later worked out a roof plan.

Meanwhile, questionnaires were sent to tenants of the 26 buildings and their answers were boiled down on a master chart which gives details of building construction, progress on air raid defenses, building managers with their night and day phones, business hours, location of utility connections, storage information, location of air raid shelters, preparation for first aid and storage points for first aid materials, anti-incendiary equipment and its location— the works. 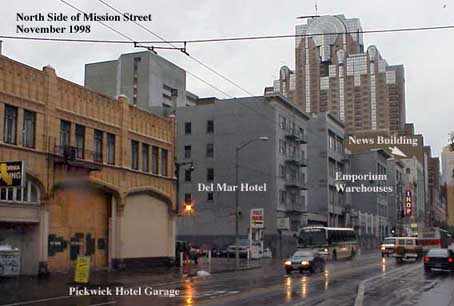 Copies of the ground and roof plans, the master chart and a supplemental organizational chart for the wardens of the block were given to all wardens and meetings were held to familiarize them with the setup.

This plan making and plot drawing would have been only an exercise unless it was followed through. Part of the follow through will come from civilian defense officials who are studying the plan; part is manifest in the warden training that such plans entail; unless the wardens know what the plan is all about and how to make it work, it is almost useless.

Another follow up, a practical one, is the fact that such block plans can be utilized anywhere, and in residential areas would be simple compared with that in the congested business and industrial sections.

London experience has shown that “the unexpected always happens.” But until it does, this block plan looks like it includes just about everything.