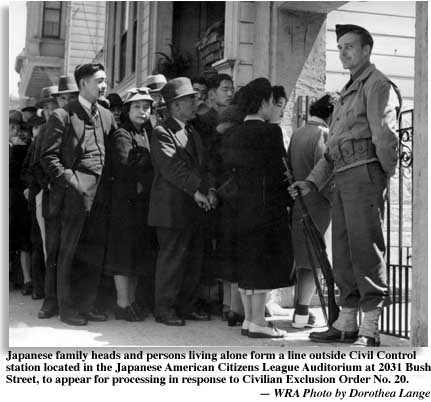 Another convoy left from Berkeley, with six more to leave before Friday.

Today’s evacuation took about half the local Japanese population of San Francisco’s primary zone; the process will be completed by Friday. The area affected is from California-st to Van Ness-av, Sutter-st to Presidio-av, holding 1923 Japanese.

“See you down there,” was the farewell of the many friends of the Japanese.

Four hundred two men, women and children formed the caravans of buses which left from the Japanese-American Citizens’ League and Civil Control Station at 2031 Bush-st. The second large group left at 10:30.

It appeared more to be the start of an outing than “ousting.” There was waving and cheering as the Japanese—family by family—filed out of the basement of the building and into the five buses parked at the curb.

Meanwhile, Lieut. Gen. DeWitt ordered the evacuation of Japanese from large portions of Multnomah County, Ore., including Portland, by May 5.

From Santa Barbara and San Luis Obispo 200 Japanese, the first of a contingent of about 2500, arrived at the Tulare assembly center.


Return to the top of the page.