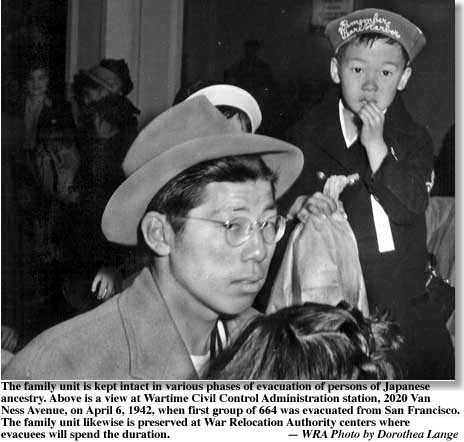 With 660 San Francisco Japanese already moved to temporary quarters at the Santa Anita Racetrack, the Wartime Civil Control Administration today was rounding out plans for removal of an estimated 4000 still here.

There was no immediate indication when the rest would be ordered to leave, and it was apparent the deadline depended on the speed with which more assembly centers could be made available. Nearest of these to San Francisco is Tanforan racetrack, where remodeling of present structures and building of new ones is just getting under way.

In Los Angeles County, two more areas were ordered cleared by April 14. About 2500 Japanese will be affected.

The arrival of a 16-car special train bearing the San Francisco Japanese boosted the evacuee population at Santa Anita to approximately 6000.

Some will go to the reception center at Manzanar, in the Owens Valley, some to inland states to help harvest crops and others to resettlement areas to be established well back from the coast. The resettlement program was being discussed today in Salt Lake City by Western state and Federal authorities at a meeting called by M[ilton].S. Eisenhower, in charge of relocation.

Departure of the first large group of Japanese from this city late yesterday was orderly, and generally, cheerful. Most of the evacuees seemed to feel they were going on a picnic, with only the one-time everpresent cameras missing.

FBI agents were busy again today in the Bay Area. They took two alien Japanese into custody in Niles and Mt. Eden, and were searching a dozen other homes of Italians, Germans and Japanese on reports that contraband was held by the aliens.

Photograph and caption from the War Relocation Authority.